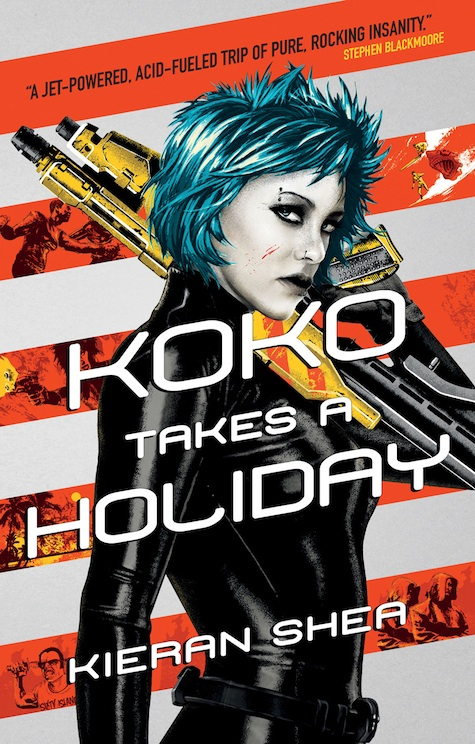 JASON: (Noticing) Yeah. How's that for eye-full first thing in the morning?

JASON: Like clockwork. I think he was in Afghanistan or something.

BRETT: I've never seen him before.

JASON: Uh, yeah. That's because you've never had the early shift before. That dude is, like, a total dawn patrol psycho, one of those I'm-gonna-live-forever fitness morons.

BRETT: Have you ever talked to him?

JASON: No way, man. My job says to keep an eye on the lanes not to get all chatty with the members. It's gotten to the point where I don't even notice his scars no more.

BRETT: Any. You don't even notice his scars any more. (Beat) Afghanistan, huh?

JASON: (Shrugs) Maybe. Maybe Iraq. Like it even matters at this point.

BRETT: I bet one of the regulars here knows what happened to him.

JASON: I've been on the early shift for over a year and that guy keeps to himself.

JASON: Oh, sure. You go and ask Miss Bitch-On-Wheels and see if she don't rag all over you for prying into a club member's privacy. What you really ought to see is that guy's mouth.

JASON: Yeah. I swear, it's like this weird reptilian slit or something. Oh, don't give me that look. You try looking him straight in the face when you see him. I'm telling you, that shit is just plain work.

BRETT: How long does he swim for?

JASON: Does about a mile. Sometimes more, sometimes less.

BRETT: (Wincing) Jeeze, look at his back.

JASON: Back nothing, wait until he does his kick turn. Look close though or you'll miss it. Okay, hold on … here he comes.

(Long pause, they watch the pool)

JASON: Was I right or was I right? (Laughs, snorts) It's like some sort of flipper chewed down to the nub. Got to give the guy props though. Just gimps his crispiness in here every day and does his thing. Yo, check it out. I think he's about to get out of the pool. Yeah, there he goes. Goddamn, just look at that, will you? So, what's the deal here, huh? You breaking me or what?

BRETT: Go check the levels in the pump room.

JASON: I already checked levels in the pump room.

JASON: (Getting down, JASON trades places with BRETT and hands him the rescue tube) Levels … I swear to God. Miss Bitch-On-Wheels doesn't know the first thing about running a pool.

(Skulking JASON exits STAGE LEFT muttering. A moment later MAN enters from the STAGE RIGHT. He walks with a cane and a robe covers ninety percent of his body. His flesh, where visible, is horrifically burned)

BRETT: (Speaking with some measure of difficulty) Um, no, not exactly. I'm just usually, like, on later. I'm enrolled over at the community college, and I'm substituting for someone. Is there something I can help you with?

MAN: You two were staring.

MAN: You and the other guard. The one that was just here. I saw you. You were staring at me. (Pause) I'm not a freak, you know.

MAN: (Interrupting) You want to know why I'm like this? Everybody wants to know.

BRETT: Sir, I think you're mistaken.

BRETT: It's really none of my business.

MAN: So what did he say?

MAN: The other guard. That little stoner puke with the pukka necklace.

BRETT: Sir, if you think we've offended you—

MAN: My wife and daughter were in a fire. I ran into the fire to save them. I didn't.

MAN: Why? You didn't know them.

MAN: Happened four years ago out west in Los Angeles. We'd just bought a house in San Bernardino post-bubble. I'd a pretty good job with the IBEW, the electrical union. Hollywood. Soundstage stuff, but mostly special events and office buildings, things like that. When people hear you used to work in Hollywood everybody thinks—wow—movies and TV and shit, but it's not like that at all. It's an industry. Thousands upon thousands of people plugged into a machine trying to make a living. No one outside of LA understands that. Anyway, I grew up in Carlsbad down along the coast and worked my way up until I got my card. To shore up my union paychecks occasionally I took moonlighting work. Weekends mostly, nights. I'd just finished up this patio wiring thing in the hills for a fat load of cash when my wife found us a rancher minutes from the 210. I'd my eye on a rebuilt, vintage Harley IronHead Sportster, but marriage changes your priorities. My wife made me put all of the money toward a down payment. (Pause) The cops, their arson inspectors, they couldn't figure out who did it. Turns out the house next to the one we bought? The people that moved away a few months before were into some bad things. Of course, the big theory was somebody got the wrong house and torched mine instead. Maybe I should've died in that fire too, but I didn't. Gas bomb came right though the master bedroom where my wife and daughter were sleeping. I was asleep on the couch in the living room. Baseball game, four of a six pack in my gut and dead to the world. I didn't wake up until I heard the screaming and it took a second to register the movement on the ceiling was flames. The whole place went up in less than a minute. There were security bars on the windows in the master bedroom, made to give way from the inside, but the previous occupants installed them on the cheap. Home inspector pointed it out and all, but I said I'd fix it later because my wife was so wild about getting the house. I'm telling you, the things you do for a decent school district is a national shame. Anyhow, when I tried the bedroom door there was this huge WHOOOSH! and the fire just ate the air. The last thing I remember hearing besides my wife and baby girl screaming was the sound of my own flesh sizzling. (Long pause) A neighbor pulled me out by my belt, and the firemen found my wife and daughter fused together like a chunk of coal in the closet. The next time your buddy stares at me, tell him that, okay?

(MAN and BRETT look at each other)