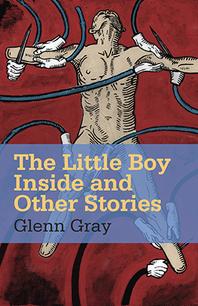 Chief Fatty sits looking like he never seen me before, hands folded on his big gut like he praying. Fine corduroy slacks and that nasty-ass bowtie. The grooves in the corduroy like mountains and valleys and the bowtie big and colorful looking like Bozo the clown, all crazy sitting there like that. He just sits looking at me, waiting. So I tell 'em some more. "Yo dude," I say. "We all bricks. You a brick. I'm a brick. Bricks bricks bricks. A towering concrete wall, big and round and surrounding it all."

Chief Fatty smirks at me. His lips going up at the edges. Big square teeth starting to show now. White shiny teeth. He says, "Anything else?"

Everyone around me now looking and waiting. Jimenez got that shit-eating grin on. Know he's laughing. The dumb-ass. Know he wants my Walkman. Hid it in the bottom of the drawer. Ain't never gonna find it there. Hid it under the blankets, tucked away. Amazing blankets. Tell Chief Fatty this. Tell him. "Amazing blankets, man. You keep 'em tight up against your body they do wonders. A chemical—no no no—an atomic thing."

Now the new one is scribbling furiously in his book. Writing and writing like there's no tomorrow, like he's writing the Bible or some shit. Man, he means business and he looking like a big boy. Like a new baby in diapers gonna cry for a bottle any second now, writing and writing. Look over his way and connect the eyes, man. The pupils lock. Ain't never seen me before. I know it. Got the glasses hanging down on his nose and I can see the magnification. The eyeball in its shell encased in a globe like the Earth spinning around in his head. Tell him, "Yo, you know it. It's about the lateness of formation." Stops scribbling and ceases motion and he's frozen, stunted in space not knowing what to do like he been entombed in a glass box. Tell him, "We all heads. My head. It's like the apple and the worm."

Then he speaks. Quiet except for his voice oozing out all brand new. Squeaking and saying something and the mouth is open, tongue beet-red and glossy with bumps and the nostrils open ever so slightly and one fine hair sticks out like a sword. Big Boy says, "What exactly do you mean by that?"

I had to jump in. I ask him, "What exactly do you mean by that?" He's going on about this apple and the worm. It's my first community meeting at the VA Hospital, Psych rotation, and I don't quite have a handle on all the patients just yet but I figure it was a good a time as any. This guy, Preston, is rocking back and forth talking gibberish and then he starts to stare at me. I find this somewhat unnerving but I figure I should probably get used to it. I look over at the attending physician for reassurance and he gives me a subtle affirmative nod. So I go on.

"The apple and the worm," I say. "What exactly is the significance?"

Preston keeps rocking. He wears tattered flannel pajamas and a wool blanket wrapped around his shoulders. Now he is staring at Jimenez, the guy sitting next to him.

"The same as the toothbrush and the scepter," he says, slowly turning his head back in my direction. "Like Moses parting the sea."

I massage my chin with thumb and index finger, feeling psychiatrist-like. "I see."

Preston gets up and shuffles toward the door. Doctor Bradley, the attending, says without looking at him, "Could you please sit down."

Dr. Bradley takes a long breath, says slowly, "It'd be better if you stuck it out."

Preston, staring straight ahead, proceeds to remove his penis from the slit in his pajamas. He leans back and relieves himself—a terrific arc of urine splashing steps from Dr. Bradley's shoes.

"Sticking it out," Preston says, stone-faced, tucking himself back into his pajamas. "In a vast sea of knowledge."

Big Boy says, "What exactly do you mean by that?" And hear the words and they echo and echo and echo and the room is the Grand Canyon with rocks and rivers flowing down the cliff and a bald eagle flapping, diving for mice, biting, pulling, and then gone. Up and out and I fly too and soar between buildings in the city each window a hole to devour and suck me in and then hear the squeaking again, this time like a mouse. It says, "What exactly is the significance?"

Jimenez laughing again and I hear it and it hammers in my head and he laughs with that dumbass face. He smells. See the odor like black smoke drifting up and up and up and I know he wants my food too 'cause each time the tray is there he eyes it. He ain't gonna get it. Big Boy is still looking up my alley asking about the significance and I want to tell 'em like it is, man. Tell 'em the whole thing but he's just a baby boy, scribbling in his book with crayons, coloring a nice picture for mommy.

Tell him, "The same as the toothbrush and the scepter." It's all about the Bible. Big Boy looking up my alley, waiting—needing a diaper change. The river turns into the sea and there's the eagle soaring high above the city looking for mice. Big Boy's face tight, lips pulled across the head. We all heads and his head is here and so is mine and so is the head of Moses. Tell him, "Like Moses parting the sea."

The bald head speaking, mouthless. Words spurting forward through a blank chasm. Floating to me. Ears reaching out to grab the small butterflies. "It'd be better if you stuck it out."

The river must be delivered and the pressure released and the ding-dong comes forward. "Sticking it out," I say. Can hear Jimenez behind me laughing. Smelly dumb-ass. Big Boy looks up my alley and so does Washington and Ramirez and Poustalis and the rest of them. They wait and they thinking hard so I tell 'em, "In a vast sea of knowledge."

Dr. Bradley barely flinches when Preston starts to urinate, although he does shift his legs away slightly. An orderly with a mop and bucket and a stern face appears almost instantaneously. He must have been waiting in the wings. Preston returns to his seat, starts to rock and then alternately crosses and uncrosses his legs.

"Good, good," Mr. Postoulis chimes in. There is a wide smile pasted across his face, which is dotted with bits of now bloody tissue paper he must have stuck on after shaving this morning. "Good. I want now to go my discharge. On pass. With my sister, yes?"

Raphael Jimenez slouches back in his chair, feet up on the canister used as an ashtray. His long hair is slicked back in a ponytail, a thick gold chain hangs from his neck and he wears a baseball cap with "Viet Nam Vet" emblazoned across the front in faded red letters. He says, "This a kindergarten meeting. Looks like Romper Room in here." He shifts in his seat and makes a clicking noise in his cheek. "All you need is some jack-in-the-box music."

There are a few sighs and grunts. Mr. Jimenez continues. "Got people peein' on the floor like kids."

I look at Dr. Bradley and then my classmate Amy, who has her face stuck in her notebook. I'm eager to jump in again but I wait. I look at Preston who is now glaring at me.

Preston, eyes bearing down on me, says, "I'm a volcano bubbling up."

Chief Fatty looking again, bowtie big as his head. Says, "Let's start again." And now everything all red and fuzzy with Postoulis talking about going on pass and Jimenez going on about kindergarten and Romper Room and he's all red. His skin and his face and red clouds are puffing from his mouth and his chest going up and down—mouth like a flaming tunnel with the words coming out smoky. Chief Fatty all red too and everyone else 'cept Big Boy. Big Boy feeling the fire. I'm tall as a building looking down at Big Boy and I tell 'em, "I'm a volcano bubbling up."

Big Boy looking more like a baby than ever, squeaking, "Does that mean you're feeling angry?"

Preston appears rather agitated and he is staring at me with piercing eyes. Dr. Bradley does not say a word and when Preston stands I ask him, "Does that mean you're feeling angry?"

Preston bends over and pulls up his white tube socks, one at a time, all the while holding his gaze on me. When he straightens up he has an odd look on his face.

Preston does not sit. Instead he places the blanket from around his shoulders onto the chair and begins to peel off his pajamas.

Before me now stands a muscular six foot man, naked, except for a pair of white tube socks.

The naked man says, "Eruption," and starts toward me, the fluffy socks scissoring across the floor. "Molten lava has flushed the worm from the apple."

Big Boy looking up my alley his face white as pure smackdog and tender with the flames dancing around but not affecting the shell in which Big Boy exists. Chief Fatty spewing, "Preston please sit down," but the sound is on fire and the words turn to ash, charred remnants and the crackling sound of burning wood and I see Big Boy shining.

The external garments are set free to fly on their own and the heat is released and the red cloud billows and the worms come. The evolution and eruption and molten worms wriggle and tell Big Boy, "Eruption. Molten lava has flushed the worm from the apple."

Big Boy got a puzzled look, head cocked as I descend and my hands far out ahead of me, reaching and wanting a part of the pure baby Big Boy.

The squeaking like birds in the nest. Chirp chirp chirp and the squeak, loud this time like thunder. "Preston!"

The muscular naked six foot man in tube socks is now upon me, arms outstretched. From the corner of my eye I see Dr. Bradley pushing up from his chair. I also make an attempt to stand but it is too late. Preston's hands squeeze and lock around my neck and I yell, "Preston," and then it is difficult to even breathe. The grip tightens and I grapple at nothing, hot breath like a fan blowing wet air in my face and then two orderlies are pulling Preston back and there is a nurse looming with a glistening syringe.

Within seconds the vice is released and Preston's hands fall to his side. He slumps into a wheelchair and is subsequently rolled from the room, tucked into bed, restrained, and heavily sedated.

After a short break, the meeting is resumed.

It is quiet at first. Vacant faces, staring.

Poustalis is the first to speak. He says, "I go on pass now, yes?"