At precisely 5:30 Thursday afternoon, Henry Philips stood by the elevator bank just outside his office door. His work done for the day, his mind was already on tonight's television programs, Medical Center followed by Mannix, his sole entertainment, aside from a book now and then.

The door whirred apart and he stepped in. "Well, I see you're on time, Mr. Philips." The operator smiled in a friendly fashion.

"Always, John." He took a spot in front of a young couple, the woman quite pregnant. Next to them, standing behind John, was a youth with long, stringy hair and a bony face.

"Down." The operator punched the button labeled 1. They hadn't dropped a floor when the hollow-faced boy reached out, flicked the emergency stop.

"Hey! What's this?" Philips wheeled to face him, anger rising at the boy. Ready to berate him, Philips paled at the sight of a wicked looking handgun, one of those cheap "Saturday night specials," aiming at him. Withdrawing a step, he halted only when his back pressed against the padded sidewall.

"Stop!" The youth darted forward as John jerked his hand away from the emergency phone. Snatching it, he tugged hard until the cord ripped loose.

"How long do you intend to hold us here?" Philips said, a frown of consternation creasing his brow, mingled with a tinge of fear.

"It's up to you—" he shrugged "—the faster you give me your valuables." He produced a small paper sack from under his jacket, popping it open with a snap of the wrist. "Just dump it in." He waved the pistol to underscore his point.

Philips began digging out his wallet. It held identification and a few bills only. No watch, rings. The others moved to comply also, except the pregnant woman. One hand clutched a diamond locket protectively.

The youth noticed immediately. "The locket."

"No, please! It was a wedding gift from my husband!"

"I don't give a damn! In the sack!" He waved the gun under her nose.

"No!" A defiant shriek and tighter clutching. Tears streamed down her cheeks.

Snarling angrily, the youth snapped the gun up. The short barrel clipped the woman's jaw, and she sagged in her husband's arms—the man in shock, chalk-white, mouth agape. The boy tugged the locket loose and deposited it in his sack.

"You animal!" Philips was surprised by his words and actions. Though terrified, he leaped for the assailant, wrapping a big hand over the pistol. He had bulk and, hopefully, strength over his opponent. They struggled, slamming into the wall and sliding down to the floor. Philips, on top, pummeled the thin face with his free hand. Yelling. Cursing. The body under him suddenly went limp.

Staggering to his feet, gun in hand, Philips looked around. Horrified stares greeted him. The boy's nose spread all over his face and a tooth was broken.

Philips looked up. The woman's expression twisted in anguish, breathing hard. Oh no, it couldn't be. "Is she—"

The elevator refused to start.

Philips muttered under his breath. Just a few minutes earlier, the CBS lineup had been his highest priority. Now, gun still grasped in his bloodied hand, the weight set in … with the woman puffing through intense contractions and the youth on the floor beginning to stir.

George R. Johnson (1949-2015) hailed from Eden, North Carolina. An avid reader of a wide range of pulp fiction, he regularly posted reviews at his Not the Baseball Pitcher blog and was well respected among a number of prominent writers. "A Well-Ordered Life?", written in the mid 1970s, is being published for the first time. 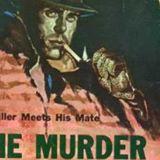