The third round of chemo shatters any illusion of a return to full health. It's at this point that I'm well past the shock of seeing him without a healthy head of hair, without a healthy glow in his cheeks, and without the smell of sick clinging to him. Wiping his ass and lifting him in and out of the bath feels normal. The idea of him doing these things by himself is already alien. Sick as the new healthy; the useless now the caretaker and the breadwinner now useless.

A year. It was a year since we had company over for a game night and Steve fell down the stairs. We laughed. It was a silly accident.

Then he fell again.

Malignant brain tumors tend to do that to a person's sense of balance.

Steve's not in the right state of mind to discuss finances or next steps. I schedule the appointments and sort out what I'm able to, careful to only loop him in if it immediately affects his well-being or if it's business I have no legal right to handle.

Which leads me to popping the big question. A spur of the moment decision entirely fueled by love, fear, and stupidity—the perfect ingredients.

Steve eyes me warily with a smirk. "You're looking to cash in once I drop dead?"

"I thought you liked bears."

And we move on.

We get married in the backyard. Steve's friend Nancy is a minister and we pull enough strings to get it all on record—legal and everything—before anyone can rescind the laws. We get my name scrawled onto all the important papers. Steve even makes me the person to decide whether he lives or dies in the event he'd ever need that decision made for him.

I'm not comfortable with that but I love him and secretly hope the cancer beats me to that decision.

"There are places we can go," I say, "Places where they're experimenting with some interesting solutions to this. Maybe we don't need to do another round of chemo."

Steve sighs. "No money. What if it doesn't work? Where does that leave you?"

"As broke as I've always been."

It all comes back to the money. Over and over. We need money for the bills, for the treatments, for all the ingenious little accessories life with cancer requires—special toilet seats, bars along the walls, catheters, hundreds and hundreds of catheters. So many goddamn catheters.

Steve's right, we can't afford trips overseas in the hopes of a miracle. We're running dry in savings and the disability checks are fucking laughable. We're in our thirties so there's no cashing out on social security. I wonder if a second or third mortgage would be worth it but this house doesn't belong to me and it was handed down to Steve by his father. I could never look him in the eye and ask him to use the house as a bargaining chip.

So I talk to people who know other people. I get a gun. I immediately regret getting said gun and hide it away in a safe in the back of my closet. Home security is how I rationalize my sudden descent into pure, lovesick desperation. I'm not a criminal. In another age I was a club boy, drank too much, did coke at worst. Robbery was something I knew about from TV.

The months pass and Steve is in a perpetual autumn, his body slowly withering to dust. We try new foods, new daily routines, and new local sights but it does little to bring him back to what he used to be. The doctors only offer us their surprise that Steve is still breathing. No solutions or ideas. Just grim smiles and assurances of Steve's strength while their wallets get fatter.

I get a part time job bartending at nights. Finagle my way into selling weed to club kids with faces like Cabbage Patch dolls. The money isn't enough but it's something to squirrel away. If Steve holds up, then maybe this means we take a trip to Germany. Maybe we hope for a miracle and see Doctor Schaff—a renowned oncologist with some interesting ideas about brain tumors and aggressive cancers—and get some real options to keep Steve on Earth for a little while longer.

If Steve holds up. But I'm not so patient anymore.

I get the gun out of the safe and bring it along to work one night. I tell myself I can sell the thing for a nice price but never offer it to any of my clients or anyone in the kitchen the way I promised myself I would. Instead, I feel its weight against the small of my back throughout my shift, during every staff interaction, during a drug deal with a kid with more cash than sense. The wad in his hand that he counts off my share—with little pain—when he pays for an ounce of my best Cali train wreck sticks in my head.

It feels like a one night stand. Dizzying, exciting, and terrifying. Before I know it, I'm home and that wad of cash is in my hand.

The take is a plane ticket taken care of. The gun becomes my new companion and the billfold gets thicker, heavier. Each time is easier than the last and it blows my mind how simple it is to not be caught; to slip the balaclava over my face, to pull the gun out and let it speak for me. That dangerous hunk of metal carries all that pain I've felt for over a year and threatens to unload white hot fury in its stead.

I get home from work one night. Steve's in the bedroom fast asleep, his sister, now helping out, in the next room asleep as well. I forget to stow my money away and instead busy myself with cleaning up. I'm too charged up to go to bed.

My energy wakes him and Steve smiles before frowning and complaining about his stomach. I help him to the bathroom and caress the back of his head as he vomits into the toilet. I can feel the prickly stubble at the nape of his neck, a reminder of the man that was; that still lives in that husk of flesh that's gone sour.

"It's okay, babe. It's okay." I kiss my favorite spot on his bald head, right above his left ear where I can still see the scars of old piercings. I help him through the rough patch and get him back to bed. We're running out of time, the work is going too slow. I check the cash when I add the night's take to the pot. We're so close. Two or maybe three more idiots and our trip will be funded. We can explore the possibilities; see the sights. I'm tired of Steve staring at the cracks in our wall as he fades away. A change of scenery would be well-deserved.

I look at the clock on our nightstand. It's only 3 in the morning. Grab my jacket, check the gun, and make my way out of the building. I know a bar nearby that's about to announce last call. The yuppie set love the fucking place but I hear they're shit tippers so those pockets will still be full of cash.

I can swing a little overtime.

Angel Luis Colón is the Anthony and Derringer Award-nominated author of No Happy Endings, the 'Blacky Jaguar' series of novellas, and the upcoming short story anthology; Meat City on Fire (And Other Assorted Debacles). His fiction has appeared in multiple web and print publications including Thuglit, Literary Orphans, and Great Jones Street. He's repped by Peter Steinberg at Foundry Literary.

THE FURY OF BLACKY JAGUAR 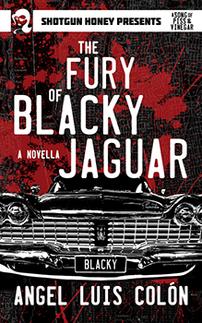 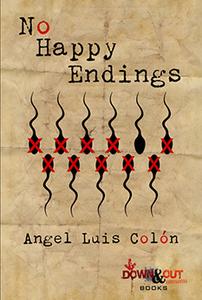