They say you can't go home again. I always thought they were wrong. My daddy did it. A couple tours in Vietnam, a stint in Detroit working the GM plant until his daddy got sick and he came back to take over the farm. 'Course, the old man managed to hold on for another ten years and they fought every day, still you can do it.

But now what I think is, you shouldn't. It ain't ever the same. Get a taste of life, of the world, of 'Out There,' and then you go home and it's all so small. Like putting on a shirt that's been shrunk in the wash. It just don't fit anymore.

Sometimes, though, you just can't help it. Familial duty, you could say. Why I was there, standing in the heat in an old, wooden church down by the creek, feeling like I was going to melt in my suit while listening to the preacher stand there espousing how good a man my father was, a stalwart of the community, and how much he would be missed now that he was called by God to that wonderful house in the heavens.

Laying it on pretty thick for a guy who used to cuss at my dad over the fence just because walnuts from our tree fell on his property. Lord forbid a stray ball ever touched his yard. And I can only imagine how he would have yelled if he'd known about his wife fucking Daddy. I never was sure if Daddy did it to get back at him or it was a coincidence. Maybe a little of both. Preacher never knew, but Daddy did and that was enough for him.

Sometimes revenge is all about the little things.

The church is packed, all the local bigshots. The county judge, mayor, the sheriff there in uniform, badge all shined up. A couple bikers, standing in the back, dust knocked off their leathers. I can't tell if I know them, not after all these years, but Daddy'd always been friendly with them, let 'em camp in one of the back pastures now and then, had one of their t-shirts in a dresser drawer. Pulled it out on special occasions, when he needed to remind someone of his connections. Helped with the negotiations.

Speakin's done and we have to start the procession to the graveyard. Don't just dig a hole in the back of the church yard anymore. Reading the headstones, my name's on half of them. My family history is the history of this place. Daddy was into that, too. Had family trees going all the way back to tiny English villages. He was more than a little pissed when I didn't even care, told him it made no fucking difference.

"One of these days, you'll want to know where you come from," he'd said.

"I'd rather know where I'm going," had been my snappy comeback.

"Can't build without a good foundation."

To which my reply was, "Fuck off."

I thought about that as we drove the small, winding road, eventually toward town and the cemetery. There wasn't as much history there, the family plot started about fifty years ago. These names belonged to people I actually knew, even if my faintest memories were of my great uncle as a frail man in a hospital bed in the back room of his house, constantly hooked to an oxygen tank. And his wife, sneaking out every few minutes to suck down a cigarette.

Anyway, that'd been our last conversation, the day I'd left for college, a couple states away. A big city, all kinds of people, the ocean. Could even try surfing. It wasn't that he didn't understand, he'd spent his time away and sometimes, when he stared into his nightly glass of rye on the porch, stars twinkling down from overhead, I thought he felt trapped by coming back here, taking over for his father. As if he couldn't see any other options. And here I was making my own, without any consideration for the family he held so dear. That's looking back. At the time, I was just pissed off, feeling that he was trying to hold me down. Didn't want me going after anything more than he'd ever had.

Instead of cops, the bikers led the procession, engines rumbling loud and clear. Hearse behind them, then Dad's big Bronco, freshly washed and waxed, my mother and sisters riding in it. Then me, in my Beemer, out of place. Gotten looks, too. So, I'd done good for myself. I wouldn't be ashamed or embarrassed about it.

Town. Cops are holding traffic on the streets leading to the cemetery. Down Broadway, turn right on Main, then right again into the cemetery itself, under the big, old iron arch. Up the hill, past the veterans memorial, to the very center of the place. Decent views. Of a shit hole, but still.

Mom doesn't even look at me as I climb out of my car behind them, huddled up against one of my sisters. There's three of them. Maybe more we don't know about if you put any stock to the gossip in town. Said my old man liked to spread it around. Knew that ever since walking in on him and the preacher's wife. And she wasn't the only one. He never tried hiding it, not from me, anyway. Guess he figured another guy would understand. How could one woman, a wife and mother at that, be enough, 'Specially when she just gets older every day? And somehow, he just knew I wouldn't say anything. I don't know why I never did. Just like he didn't know why I wasn't the same as him out every Friday night chasing tail.

"What, you some kinda fag or something?"

There'd been a bit more than the nightly glass. A six pack lay empty at his feet, the truck sat askew in the driveway. Happened every so often, once a month or so. Everything piled up and up until a man needed a release, is how he put it to me. I nodded like I knew what the fuck he was talking about.

It was summer. High school was over, graduated, with scholarships waiting to take me away like a magic pass to a fantasy kingdom. I was starting to feel my way around, figure out who I was. Didn't know if I was gay, or what, just had no interest in running around after girls, acting stupid like the other guys panting after them. Didn't get all the fuss.

"Shit. Ain't no son of mine a fag. Some kinda cocksucker."

Hell, I didn't know. Wasn't all that sure what it may have entailed. But just the way he said it …

"Least I ain't no fucking asshole bastard cheating on his wife, you shitbird."

Maybe I cared a little.

He heard me and didn't wait for it to be repeated before he swung. But I guess the beer and bourbon had caught up to him 'cause I ducked it easily enough and when I shoved him backward, he went right over the porch rail. Just laid there, too. Passed out or dead, I didn't know. But I just left him there and went to bed. Served him right if a storm came up while he laid in the fucking flower bed.

The coffin is muscled into place, ready to be lowered into the grave. Preacher giving the final graveside words. My sisters are holding up my mother, their boyfriends or husbands are right there with them. My nephew Paul's on the other side of them. He's the only one I've stayed in touch with and the only reason I even found out Dad had died. They got him in a suit, plain and no jewelry, and he looks uncomfortable as fuck but probably didn't want to upset his grandmother. Not today, sweetie, I'm sure they said. It's not the place for your foolishness.

Then, there's me. With at least a foot of space around me. Like I might give them the fucking plague or some shit. My hands are clenched. I'm just getting angrier, can feel it building up. Wanting to burn the place down and dance in the flames with a fiddle.

"Yeah, I hope he burns in fucking hell and takes y'all with him."

'Course, I don't really say that. Just stand there like always, mouth shut, seething inwardly, stomping it all down and acting like everything is fine.

With my father in the ground, they begin to leave. My family in the Bronco, probably going back to the house to a feast spread out by neighbors and friends. Car doors slam shut, engines start up. I just stand there. I haven't been invited anywhere. They'd just as soon I didn't even exist. That I'd never came back. And I have to ask myself,

He's young, eighteen, just out of high school. Middle of summer and just waiting to get away. Tall, slender kid, finely featured. Hair just long enough it could be styled in a masculine or feminine style. Depending on where he is, who's around. Best thing is, the kid knows himself exactly.

Just needs a safe place to become that person.

He grabs me in a tight hug, clings like a drowning man to a life preserver. I think I can feel my shirt getting wet.

He sniffs, chokes back some tears. I'm both pissed off and sad at what they've done. And glad they haven't worn him down all together.

"Dad said I'm dead to him and Mom won't even talk to me, just turned her back on me."

The kid actually skips to my Beemer. I flip off my father in his grave. But I gotta give it to the old man, he was right about one thing. Sometimes there is a duty to go back. 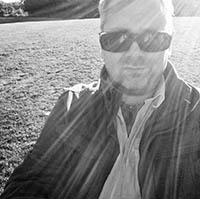 A transplanted Kentuckian now living in Canada, Jerry Bloomfield wrangles his children when not writing. Find him on Twitter at @JerryBloomfield