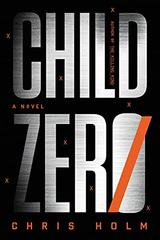 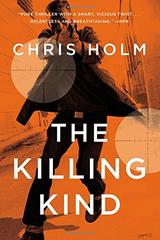 Chris Holm is the author of the cross-genre Collector trilogy, which recasts the battle between heaven and hell as old-fashioned crime pulp; the Michael Hendricks thrillers, which feature a hitman who only kills other hitmen; and the standalone scientific thriller, CHILD ZERO. He’s also a former molecular biologist with a U.S. patent to his name. Chris’ work has been selected for THE BEST AMERICAN MYSTERY STORIES, named a New York Times Editors’ Choice, and won a number of awards, including the 2016 Anthony Award for Best Novel. He lives in Portland, Maine.

When the semi’s headlights illuminated a figure in a Santa costume sprawled across the center line of the icy rural route, Randy Baum stomped the clutch and brake so hard, his truck damn near jackknifed.

Acrid notes of flop sweat and scorched rubber filled his nostrils as the big rig skittered to a halt. The man in the road—if in fact it was a man and not a decoration, blown here God knows how from God knows where—didn’t so much as twitch.

Randy glanced at the clock on the dash. It was nearly midnight. He’d left his last stop a little behind schedule, and had hoped to make the time up on the road. Now it looked as if that plan was shot to hell.

An AM station blared, cold and tinny, through the cabin’s speakers—a bunch of so-called experts arguing over whether Reagan was to blame for the Navy pilot shot down over Lebanon a few weeks back. Randy shut it off. Fact was, he didn’t really care for politics, but liked the company of talk radio on long drives, at least usually.

Then again, the silence wasn’t much better.

A pair of gloves were stuffed into the center console’s cup holder. Randy slipped them on and climbed out of the vehicle. The night air was cold and clear. A bitter wind sliced through his winter jacket and caused dry snow to swirl like mist across the roadway. The cabin’s warmth poured out through the open door he’d left behind.

Randy received no response, so he trotted toward the prostrate figure, and knelt beside it. As he tentatively extended a gloved hand, the figure shifted, and Randy found himself staring down the barrel of a snubnose .38.

Truth be told, Ed Cantor couldn’t even see all right from the frigid patch of asphalt on which he lay.

Two hours ago, he’d left his ’75 Datsun in the parking lot of a church five miles north, and schlepped his ass out here with nothing but a threadbare Santa suit and a pint bottle of Old Overholt to keep him warm. According to the weatherman, tonight was gonna be the longest of the year, and likely the coldest as well—minus thirty with the wind chill—which would’ve been miserable enough, had the truck he planned to stick up not been running late.

Now, Ed’s feet were numb, his bum knee throbbed, and the portions of his face not covered by his fake beard were chapped raw. Still, he was forced to concede it beat being held at gunpoint, so there was no point in complaining to this poor bastard.

“Are you fucking serious?” The driver sounded equal measures baffled and afraid.

Without lowering his weapon, Ed rose creakily to his feet, and dusted road salt off his faux fur costume. “I’d like to think if I was kidding, we’d both be laughing.”

“What do you care? The shit you’re hauling is insured, which means it sure as hell ain’t worth getting shot over.”

At the mention of gunfire, the driver blanched. “That’s true enough, I guess, but freezing to death doesn’t sound much better.”

“You’re not gonna freeze to death. There’s a village three miles south of here. Won’t take you but an hour to reach it if you hurry.” Ed squinted at the man appraisingly. “You ain’t a drunk, are you?”

“Good.” He fished the open whiskey bottle from his jacket pocket. “If nothing else, this’ll keep your belly nice and toasty ’til you get to where you’re going.”

The driver hesitated a moment before taking it. “Thanks.”

James “Mojo” Morris let out a low whistle as he panned his flashlight beam around the interior of the semi’s trailer. The sound reverberated off the metal walls and ceiling, a phantom chorus of agreement.

The trailer was maybe half full, brown cardboard boxes stacked on pallets, heavy duty plastic wrap securing them in place. The layered plastic blurred the brand names on the boxes to abstraction, but Mojo was able to discern them with a little help from the delivery manifest, which was affixed to a clipboard hanging just inside the trailer doors.

“I’ve gotta hand it to you, pal, this score is even sexier than advertised.”

Mojo was a smalltime fence, car parts and hi-fi equipment mostly, but trustworthy by the lax standards of his profession. Ed had parked the truck along a rutted drive behind the junkyard Mojo ran, its piled wrecks obscuring sightlines from the nearby county road. A canopy of leafless branches formed a roughhewn archway overhead, beyond which was a gibbous moon, a spray of stars.

“Goddamn right we do.”

Mojo set his flashlight down atop an undisturbed stack, removed a fat wad of cash from the side pocket of his coveralls, and counted off a couple dozen bills.

Ed stuffed all save one into his wallet. The last, he handed back to Mojo.

“The manifest is off. The load’s one short.”

Mojo shrugged, returned the bill to his pocket, and offered Ed his hand.

“Pleasure doing business with you. It’s been too long.”

Four days later, on Christmas morning, Ed picked his way along a poorly shoveled path, carrying a giftwrapped package. Freezing rain fell in diagonals from a sky of featureless white. It sounded like a baby’s rattle as it landed on the dingy hardpack below.

The path belonged to a modest rental house, chain link and aluminum siding, that Ed had once called home. His ex, Cheryl, and daughter, Gigi, still did. Wrapping paper crinkled beneath clenched fingertips, the box inside it denting slightly, as the memory of all he’d lost came to the fore.

Three weeks ago, Ed was released from the state pen, where he’d spent eighteen months for armed robbery—eighteen months that would’ve been three years, but for the fact he kept his nose clean while inside. His good behavior hadn’t prevented Cheryl from filing papers, not that he could blame her, but they’d agreed to play nice on holidays for Gigi’s sake.

Gigi was four, the spitting image of her mother, beautiful and headstrong. When he’d asked her what she wanted for Christmas, she didn’t hesitate.

Cheryl, sensing Ed’s confusion, chimed in. “It’s some kind of fancy baby doll the kids are crazy for these days, comes with its own adoption papers, but you don’t have to—”

Problem was, nobody could keep the goddamn things in stock.

Ed got laughed out of Kmart and JCPenney. Waited, shivering, in line for Toys R Us to open, only to get blanked again. Even chased one lucky shopper to her car, offering to give her double, triple what she paid, to no avail.

At Service Merchandise, Ed caught a break, if not the kind of break that he was looking for. The place wasn’t a retail store, but a catalog showroom, its wares displayed on glossy cards, an endless parade of toys, jewelry, and small household appliances emerging from the back room by conveyer belt.

The Cabbage Patch Kid cards looked as if they’d been ransacked, but at least there were a few left. He presented one to the cashier—a teenage boy with cystic acne, stoner’s eyes, and a comically large Adam’s apple—who smiled mirthlessly and shook his head.

“Yeah, you and everybody else.”

“Tell me about it. I hear those fuckin’ things are going for five hundred bucks apiece on the black market.”

Ed cocked an eyebrow. “That so?”

The kid shrugged. “I dunno. That’s what I hear.”

“You know offhand when your next shipment’s coming in, in case I wanna try again?”

“Unless there’s weather, it’ll show up midnight Wednesday—but, fair warning, we’ve had desperate parents camping out the last three Thursdays in a row.”

The entire time Ed planned the job—procuring the weapon, scrounging the costume, mapping the route—he told himself he wouldn’t actually go through with it.

Next thing he knew, he was lying in the road, his conscience twinging so hard he halfway hoped the driver failed to stop.

Instead, he made off with half a trailer of Atari 5200s, Barbie Dolls, Cabbage Patch Kids, Care Bears, G.I. Joes, My Little Ponies, and Star Wars playsets, just as easy as you please.

He hoped the driver wasn’t too sore about it.

The screen door creaked in protest as Ed yanked it open. He used a hip to prop it while he rapped on the front door with knuckles purpled by cold. It opened to the sucking sound of weather seal releasing.

Cheryl regarded him with crossed arms and pursed lips, but her expression softened when she saw the present in his hands.

Gigi, in a pair of Rudolph footie pajamas, squealed.

Ed handed her the package with a flourish. 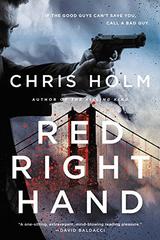 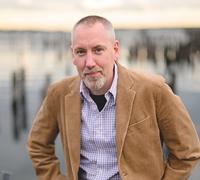